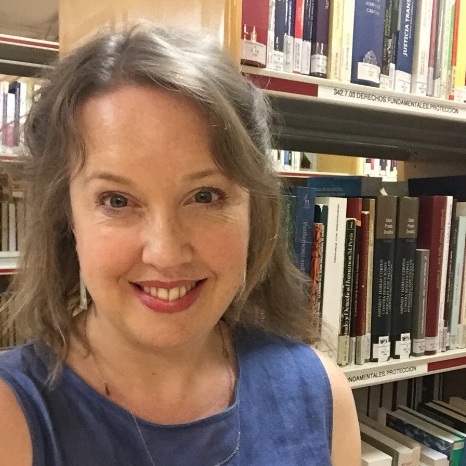 Descargar CV
Róisín Hennessy
Investigador postdoctoral CONEX
Compartir:
Dr. Róisín Hennessy holds a Doctor of Law (2016) from McGill University, Montreal Canada, where she was awarded the O’Brien Scholarship, working within the Centre for Human Rights and Legal Pluralism. At McGill, she completed her doctoral thesis titled꞉ Economic Exploitation and Child Labour: Towards a Structural Approach to International Labour Law and Human Rights. She holds the European Masters in Human Rights and Democratisation (2003), as well as a Master and Bachelor of Law from University College Cork, Ireland. In the academic context, she has taught a range of courses, including in the areas of migration law and human rights law. Her professional experience involves over 12 years as a senior policy and research expert with Ireland’s National Human Rights and Equality Commission, and, more recently, Ireland’s Department of Justice and Equality. In that context, she has authored a large range of policy advises, reports and submissions which have been submitted to UN Bodies, the Council of Europe, EU mechanisms, the national government and the national parliament on questions of human rights and equality. She has also worked in Guatemala in an NGO supporting survivors of domestic violence, and on several rule of law capacity building projects in Ethiopia, funded by Irish Aid. Her research interests are in the areas of international labour law and human rights law, social rights, social protection and social welfare systems, vulnerable populations and sustainable development, and feminist and critical legal theory and philosophy.
Vulnerable Subjects of Law and Sustainable Development – Understanding the Normative, Legal and Policy Dimensions of Social Protection Systems (VulSubLD)

Social Protection is increasingly considered as a “global social policy”. The role of social protection systems is being foregrounded as a response to a diverse number of emerging sources of instability, namely, the Covid 19 pandemic; climate adaptation and mitigation measures; increasingly precarious working practices in a globalised economy; and the growing informal economy. Influential players, including the World Bank (WB), are promoting what they term ‘universal social protection’, a narrative that would have been inconceivable from these sources 15 years ago. The Covid 19 pandemic has served to further highlight the already ‘fragile social contract’ with actors such as the International Labour Organisation (ILO) pointing out that we are at a critical juncture, and that social protection systems should be at the forefront in repairing weakened social contracts. Notwithstanding the apparent consensus on the critical role played by social protection and welfare systems, the scope, legal basis, and normative grounding for social protection and welfare systems remains contested, evolving and highly dependent on the political context. This research project grapples with the normative, legal and policy dilemmas and challenges of building and maintaining social protection and welfare systems that can incorporate the diverse experiences of vulnerable groups, and form a credible ‘social contract’ in response to emerging sources of instability, including Covid 19, increasing global inequality, climate change, and precarious/evolving work patterns in a globalised economy. The research objectives are threefold: